Google’s pandemic boom may finally be slowing down. Google’s parent company, Alphabet, reported an 8% drop in quarterly profit on Tuesday, driven by slowing advertising growth on YouTube and its search tool, as well as a drop in the value of its investments. .

The company reported net profit of $16.44 billion for the first quarter, compared with profit of $17.93 billion in the same period a year earlier, the first time the company’s quarterly profit fell from the prior year since the second quarter of 2020. Revenue jumped 23% and now stands at $68.01 billion. The results were below analysts’ expectations for net profit of $17.33 billion on revenue of $68.05 billion, according to estimates compiled by FactSet.

Alphabet’s earnings fell from a year ago, when the company saw a major rebound in demand for digital advertising and posted a $4.8 billion gain in its stock holdings. For the first quarter, Alphabet recorded a loss of $1.07 billion on the value of its investments. The company has announced in the past that it holds shares in ride-hailing service Lyft and building security firm ADT, both of which have seen their stock prices fall along with the broader market.

Growth in Google’s two main advertising businesses also slowed compared to previous quarters. Advertising on YouTube increased by 14*% compared to the previous year. The war in Ukraine has prompted some European advertisers to cut spending on YouTube, the company said. Search ads were up 24*%, but this is a deceleration from a 36*% increase in the fourth quarter of 2021. A strong dollar, which is weighing on international revenue, also dampened the quarter .

After a record-breaking 2021 with annual revenue of $257 billion (the first time the company has surpassed $200 billion in a year) Google’s parent company reports that it has started 2022 with revenue of the first quarter up 23% compared to the same period last year, reaching 68 billion dollars.

However, with expenses up from 2021, its net profit actually fell to $16.4 billion from last year’s $17.9 billion. Research and development costs for the quarter increased by more than $1 billion compared to the first quarter of 2021, from $7.485 billion to $9.1 billion. As The New York Times notes, last year the company recorded a gain of $4.8 billion in its stock holdings, and in the first quarter of 2022 it recorded a loss of $1.07 billion. . 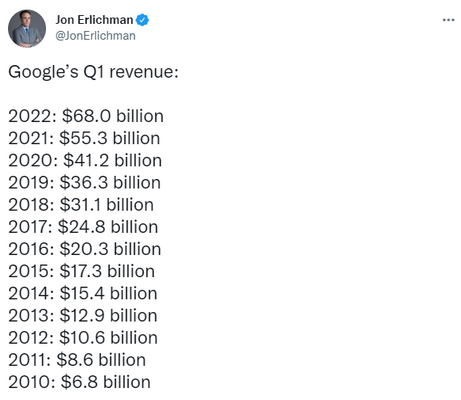 Google’s search business returned $39 billion, up significantly from the first quarter 2021 result of $31 billion. The overall ad business, including search, YouTube and its various ad networks, managed to generate $54 billion in the first quarter alone.

YouTube’s advertising revenue also increased, reaching $6.86 billion, but showed slower growth than in the past two years during the pandemic. Last year they were up around 30% but only increased 20% this year as competition from TikTok continued to heat up. YouTube responded by expanding its Shorts support for creators and viewers, but the growth failed to meet analysts’ expectations and its stock prices fell about 7% in after-hours trading. office.

In an attached statement, Sundar Pichai, CEO of Alphabet and Google, said: The first quarter saw strong growth in search and cloud, in particular, which are helping both individuals and businesses as the transformation digital continues. We will continue to invest in quality products and services and create opportunities for partners and local communities around the world.*

Ruth Porat, Chief Financial Officer of Alphabet and Google, said: We are pleased with first quarter revenue growth of 23% year over year. We continue to make thoughtful investments in Capex, R&D and talent to support the creation of long-term value for all stakeholders.

On a call with investors, Pichai discussed investments in YouTube Shorts, where daily views have reached 30 billion, four times more than a year ago, and the company is focusing first on creating a great experience. He specifically touched on plans for a revamped YouTube experience that will give viewers more controls and the ability to comment while watching on a connected TV and increased support for Shorts. Below, the call with investors.

Earlier this year, Neal Mohan, Product Director of YouTube, gave more details on the upcoming changes, as well as upgrades to the editing experience and other ways creators can earn money. with Shorts, with Super Chats, branded content, and possibly shopping. by Shorts.

How do you read these results?

Microsoft reports another quarter of double-digit revenue growth thanks to its Cloud, Office and Windows division